I've been able to use Beepbox to compose music tracks, export them to MIDI files, and then import those MIDI files to OpenMPT, finally converting them to Impulse Tracker files for use with my GBA game I'm working on using Butano.

Beepbox is a web-based application for composing chiptune music tracks made by John Nesky.

To quote the application itself:

BeepBox is an online tool for sketching and sharing instrumental melodies.

It has instructions that provide a quick explanation of its features and how to use it on its webpage.

Beepbox is a handy way to make the basis of a track's composition faster if you don't have much experience using the pattern editor in mod tracking software like OpenMPT.

To avoid re-inventing the wheel I shall link to this video tutorial here by ShifterChaos95 on YouTube. I think it's a well-made quick overview of using Beepbox and it also covers some relevant audio principles involved when one decides to MAKE A MUSIC.

In Beepbox's menu there are four options for export: 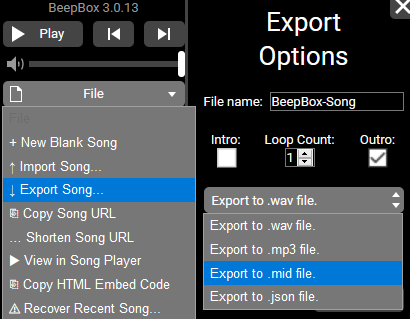 Now the saved MIDI will have the song's notes (when they play, how long, what pitch, etc.) but doesn't include sound data or Beepbox's exact instruments. When you import this file into OpenMPT, chances are it'll sound very different since OpenMPT will have to use whatever standard samples it has on hand to try to match what instrument was used in Beepbox but this doesn't always result in the song successfully retaining it's intended demeanor. However after converting the MIDI to IT format, you can replace the sound samples in OpenMPT to change how the music sounds.

Converting from MIDI to a Mod Tracker Format

Impulse Tracker Being the Target Format

In short, IT is the format I went with because it is the most advanced of the formats that Maxmod (middleware for playing mod tracker music on the GBA and DS, which is used by Butano for handling audio) supports. MPTM is more advanced but this is not supported by Maxmod and is not needed anyway since IT is adequate for the purpose of using music made in Beepbox in mod tracking format. The OpenMPT Wiki has more in-depth information about the mod tracking formats if you're interested in reading about them.

Obtaining the Correct Music Speed on the GBA

I've noticed when a MIDI track exported from Beepbox is imported to OpenMPT and them converted to IT, the Initial Tempo is set to 300 and the Ticks/Row is set to 6. In my experience, this results in the music not playing at the right speed once in a compiled GBA game (a Butano project to be precise). Changing the Initial Tempo to 250 and the Ticks/Row to 5 maintains the appropriate speed in OpenMPT and results in that speed actually being achieved once in a running GBA game.

In the left pane of OpenMPT you'll see instruments and samples. In the case an instrument is tied to one sample, just replace the sample with a sound sample of your choice to change how that instrument sounds in the mod tracker version of the song. Sometimes a single instrument (corresponding with an instrument row in Beepbox will have multiple samples, I modify the instrument to use one sample and replace that sample in that case.

OpenMPT has a bunch of included sound samples located at C:\Program Files\OpenMPT\ExampleSongs\Samples.

Once you've replaced the samples and the music sounds as you intend it to, just save the IT file and throw it into your project. I've only tested this with Butano but I imagine this would work with anything that uses Maxmod for music playback.