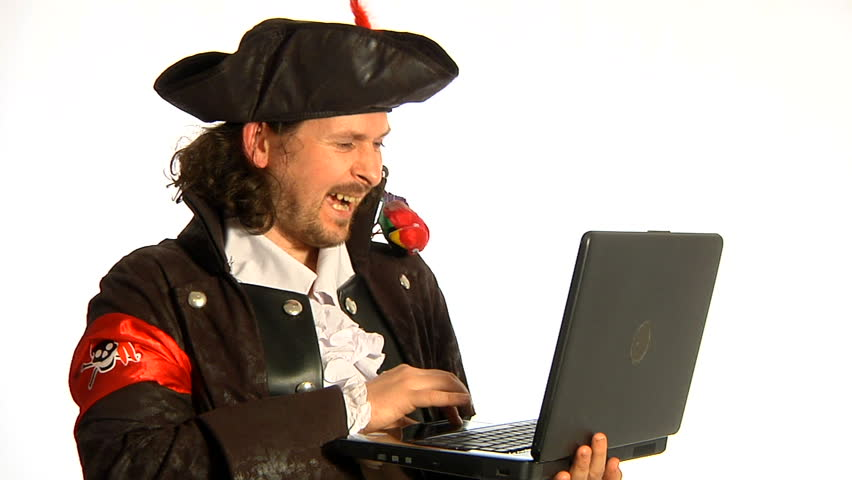 This guide is intended to show absolute beginners how to pirate anything, and how to stay safe doing it.

For starters, if you're on Windows you want to make sure you can see file extensions. File extensions determine what "type" of file a file is, and are the bold part in this example: example.txt

On Windows 10 you can open Settings and type the following in: 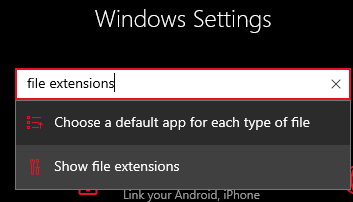 Clicking on "Show file extensions" will put you in the "For developers" page. You want to tick the first two boxes as shown below, but you can also tick the others if you want. 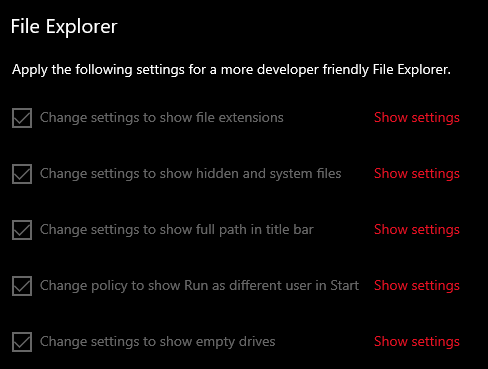 Now, back in Settings, type in "reputation". We're about to turn off "reputation-based protection" on Windows. This is supposed to stop you from downloading garbage and viruses off the internet, but it will also flag pirated software sometimes, and you don't want that.

You want to untick the highlighted settings below. You can also untick the other ones if you want but that's not necessary. 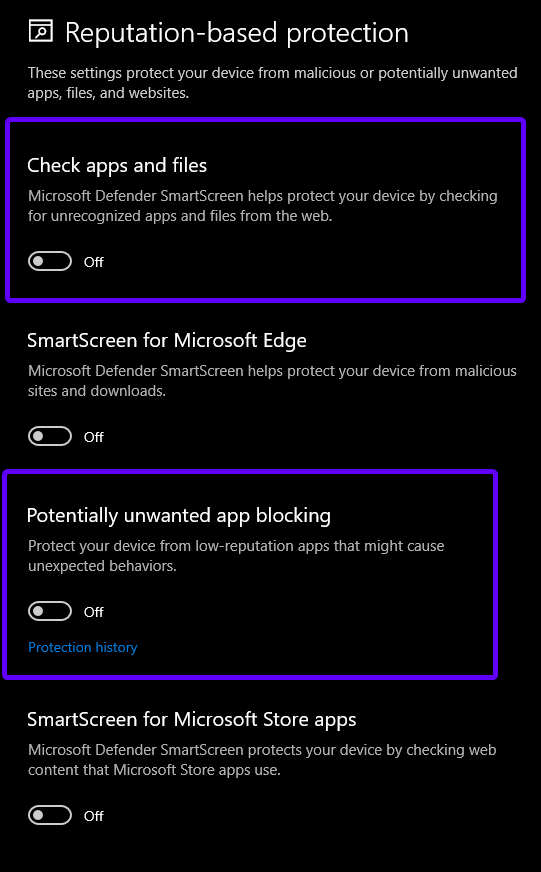 Now that you can see file extensions, and you've disabled Windows' shit, it's time to download an antivirus. I recommend Malwarebytes. Once you have Malwarebytes downloaded, you should decide whether or not you trust yourself to not have an antivirus running 24/7.

This is important. Remember, you turned off the integrated antivirus for Windows. You can still have Malwarebytes be a regular antivirus, running in the background, or you can have it turned off and be careful with what you download and do with foreign files. Further down this guide is more information on how to handle files safely.

For Malwarebytes settings, I recommend you go over all of them and:

Having "Show Malwarebytes options in Windows Explorer" on gives you a "Scan with Malwarebytes" option when you right-click files or folders. You can use this to quickly figure out if something is safe, insofar as the antivirus knows.

Now that you have an antivirus, it's time to download and set up a torrent client. I recommend qBittorrent.

During the installation you'll be asked which components to install. The ones highlighted below are very important and I recommend installing them. (The ones not highlighted are up to you.) 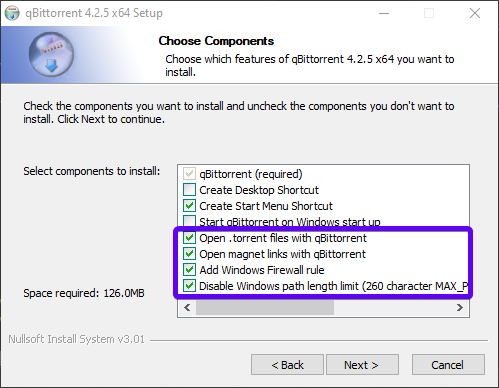 Once you've finished installing it, open it and go to its Options menu:

You specifically want to go to the Downloads section and change this path:

Make a "torrents" folder in your Downloads folder if it doesn't exist. Alternatively, you can have this path be anywhere you want.

Finally, the last things you want to install are WinCDEmu and 7Zip. WinCDEmu is a tool for opening .iso files, which are disk images. 7Zip is a file archiver, or, what you use to open .zip, .rar, .gzip, etc.

If you're one of those people who are still using WinRar on the free trial for some reason, take this opportunity to uninstall it and replace it with 7Zip.

With all of that done, you are now ready to start.

What is "torrenting"? Torrenting is downloading a file other people are hosting. There is no one, single website that hosts the file you're downloading. Instead, other people host the file on their computers, and you dowload the file bit by bit off of them. This is called peer-to-peer file sharing, also abbreviated as P2P.

In this situation, the other people are "seeding" the file - they're uploading it to you. If they don't do that, the file becomes harder and harder to acquire, until no one is seeding and you can't get it at all. For this reason, once you're finished downloading something, your torrent client will start seeding it automatically. You're not obligated to seed, but it's important you do.

If you want to stop seeding a torrent, you can pause it. You can also impose limits on how much you seed in your Options, if you want.

As I said before, the files are hosted by people, not by websites. But how do people actually find torrents? Basically, every torrent has a "magnet link". Magnet links look like this:

In your browser, when you hover over a link, you'll notice it will show you its URL in the bottom.

This also happens with magnets: 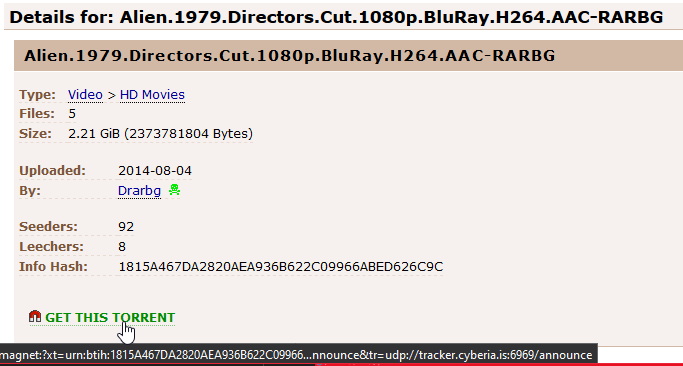 Torrent sites can also offer .torrent files you can download as an alternative. These are completely safe, and work the same as magnets.

If you click such a link, it'll open up qBittorrent with a dialog to add the torrent for this magnet. It won't show any files and some other info at first, because it's getting the "metadata". 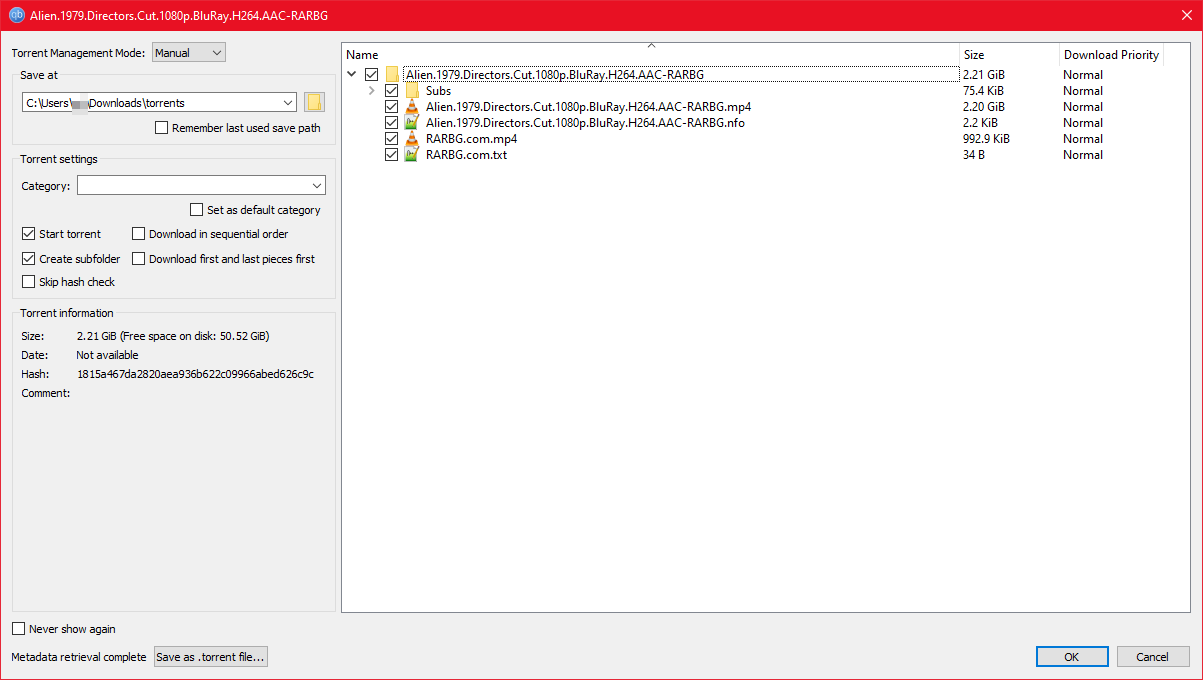 Here you can do a number of things, but they're out of the scope of this guide. To start downloading this torrent, you just hit "OK" in the bottom right.

In qBittorrent you have a table of information on your torrent. The most important ones are the Down Speed, ETA (Estimated Time of Arrival), Size and Remaining. You can edit the position of these columns and even add or remove some if you right-click the header.

You may have heard before that torrenting (or more broadly, piracy) is dangerous for your computer. This is true, but not nearly as much as people generally say. Most things avaialble in torrents are completely safe. Things like audio or video files are what I'd call "inert" files, since they can't do anything to your computer.

On that note, I recommend installing VLC to play audio and video files. If you want something specifically for music, try foobar2000.

Soulseek is a P2P file-sharing software (similar but not the same as torrenting) that mostly has music. It has a search function, so you can find whatever music you want, as long as other people are hosting it.

When it comes to safety, there is an important distinction between pirating videogames and game ROMs. Game ROMs typically run on emulators, whereas videogames (and their installers) run on your computer.

The extra layer the emulator provides is important - if thousands of people are using the Dolphin emulator, for instance, you can be sure that if it had a security issue it'd be fixed near instantly, or people would be talking trash about it online. At the same time, it's unlikely a game ROM will have a virus embedded on it - why would anyone spread that?

If you have some idea that random strangers on the internet are malicious for no reason, you're right to think so. But it's naïve to think they'd host garbage files.

On all of these, you want to run an antivirus scan. For disk images or file archives, you want to scan the files inside. For archives this means you have to extract the files somewhere first, which is perfectly safe, also. Simply moving files around offers no danger whatsoever, and you can rely on that.

How do pirated videogames run at all? For Steam games, they generally come with a patched steam dll (you don't need to know what that means), or with a Steam emulator bundled. Some games come simply as DRM-free GOG installers. Some older games will come with the original files plus a patch and/or a keygen that let you install the game for free.

Software is easily the most dangerous thing to pirate, because viruses are a little more common. As in the previous section, you should run antivirus scans on the files you get, but still be wary. In particular, you'll want to look in comment sections to see what other people say about torrents, and make your own decisions.

This is a good opportunity to remind you that it's not a faux pas to ask people for help. Someone else probably has a good torrent of FL Studio you can ask for.

Where to find shit#

Something very important to know is that not only is it illegal to download copyrighted material, it's also illegal to link to that material, including with magnets. For this reason, torrent sites will go down fairly often, but will just as often get a new URL.

Because the URLs aren't reliable, I'm writing the name of the site first, and then the URL at the time of this writing.

These are the ones I know of. You can search for more on your own!

Here's some other tools I recommend.

I also personally recommend you stop using Google Chrome if you are, and that you install a proper adblock like uBlock Origin (Adblock Plus sucks). Also, consider using DuckDuckGo instead of Google. I haven't used Google in years and for all I know they block piracy-related search results.

I hope this helps! Remember to seed generously.